Inside the mind of a driller – Caz Nattrass

At Egan Drilling, we are bloody proud of each and every member of our crew. Caz is no exception to this rule!

Although he has only been with the company for a couple of short months, we are extremely impressed with his work ethic and rig management style. He is energetic about getting the best out of his rig and his guys and opts for a proactive approach to maintenance, safety and training. The continuity that comes with having a strong leader at the helm has already shown to pay dividends in the form of a significant increase in production rates.

So we would like you to come and spend a few minutes getting to know Caz as we hit him with a few questions on his career so far and what the future might hold for this bright young star.

Where you were born/grew up?

I was born in Kalgoorlie in 1984. The son of Boulder publicans. I grew up in the pub until I was about 4 then we moved down to Esperance where I grew up and developed a love for fishing and all things ocean. I try to spend as much time as I’m allowed on break fishing.

Where you did you get your start in the drilling world?

How long did you offside for before relieving your first day? 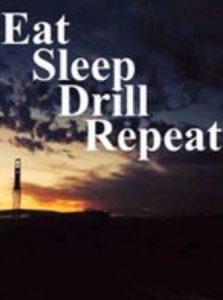 What do you love about drilling?

Problem-solving and overcoming challenges. Being outside is a must for me. I am also very fascinated by the science and engineering involved in the industry.

What do you like about Egan’s in your time so far?

What do you think of Dacian?

Great site and great people. Beats sleeping in a tent for 11 weeks in Arnhem Land during the build-up to wet season.

What do you think of Rig 1?

Very innovative. Growing to love it now we are ironing out the wrinkles from the rebuild.

What are a few of your career highlights to date?

Heli-drilling in remote parts of the NT!

Being requested as the preferred driller by a project geo for a large exploration contract in the Northwest.

Who have you worked for over the years?

The list is long and sometimes not overly distinguished but notable highlights are;

Who trained you up and what has concepts have stuck with you since?

Henry Taitt, I have pretty much tried to emulate everything about Henry’s approach to drilling, especially management style, proactivity and approach to maintenance.

What ground has taunted you the most of the years?

Have you done much camping and where?

Most of my early exploration career was tents, swags and caravans in;

What are your drilling aspirations, grand as you like?

I’m happy being on the levers at the moment though down the track I would like to look at a supervisory role.

Who’s waiting for you at home when you fly in from a swing?

My wife, Aimee and I have just celebrated our second wedding anniversary. I have her to thank for where I am today. Aimee is an extremely driven, disciplined and measured woman. She has been instrumental in me treating every aspect of my life with respect and purpose. She’s the love of my life!

Since 1968, our passion for the Australian drilling industry and pursuit of drilling excellence has resulted in outstanding outcomes for our clients, stakeholders, and people.